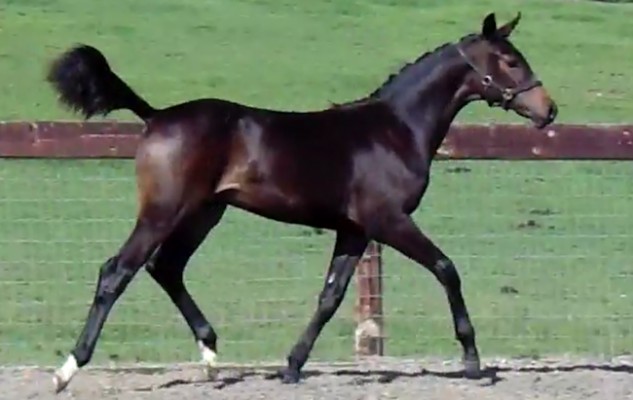 Stunning filly foal for sale with 3 beautiful athletic paces, a true dressage prospect. DWS Firelight is dark bay with white markings. She is showing an exceptional temperament and a willingness to please. Will make 169cm. Sired by the successful Grand Prix dressage stallion Fidertanz, an incredibly powerful and charismatic stallion known for his exceptional rideability and outstanding movement.

Fidertanz dominated his 30-day test in Neustadt-Dosse, and then a year later took the Vice Champion title at the Bundeschampionat in Warendorf. In 2006 he was awarded the dressage Hautpramie in Oldenburg in recognition of his outstanding first foal crop. Fidertanz’s offspring are highly coveted and bring top prices, proven in Verden, Vechta, Munster-Handorf and Switzerland. Fidertanz has no less than 30 licenced sons, including Franziskus, ridden by Ingrid Klimke.

The Dam, Daylight B, is by Donnersmark a Serial Champion at FEI Level Dressage with a High Breeding Index. Sire of several state premium mares and a licencsed son. His sire was the well regarded Davignon, by the infamous Donnerhall, who needs no introduction. The second Dam, Thermique (State Premium mare) is by the Hannovarian stallion Trapper, a producer of State Premium mares and the Olympic horses, Tiamo Trocadero and Tambourin, who made the US reserve team in 2000 under Karen Offield, and the Canadian team in the 1994 Atlanta Olympics, respectively. Third Dam, Duerka, was sired by Darling a well know producer of dressage stallions. Darling’s well known son Dynasty, was before his death, considered the best dressage horse in Canada.

The full sister, DWS Fantastika, 2yo, can be seen and is a window into the future, showing 3 athletic and rhythmical paces and an exemplary temperament. Also related through the Sire, to Florentina DWS, 6yo, who holds National Championship titles at Preliminary and Novice (2017), Winter Champion at Novice (2018) and Reserve Champion at Hickstead Dressage Masters Novice (2018) scoring consistently between 70% and 80%.