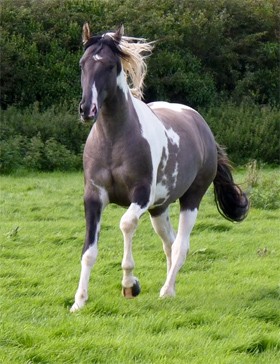 Gabriel’s Ghost Double homozygous grullo tobiano American Paint Stallion imported from Montana in 2008 Gabriel’s Ghost has been DNA tested and is negative for the following genetic diseases: PSSM NN, HERDA NN, GBED NN, MH NN, HYPP NN (no Impressive in pedigree) Gabriel’s pedigree Gabriel’s Ghost was born at the Spotted Fawn Paint Horse Ranch in Montana in March 2007. We were very lucky to be able to import him as a yearling to the UK in 2008. He has an excellent pedigree being by the fabulous blue roan tobiano stallion ‘Heza Blue Tomcat’ who was bred by Wendy Malone of Spotted Fawn Paints and now stands at stud at Tashanor Park in Austraila. Gabriel’s sire line has APHA champions throughout his pedigree including Nevada Wardrum, The Aztec Eagle by QT Poco Streke, a multiple reining champion producer, Dixie’s War Drum, Q Ton Eagle, Lucky Straw, Truly Truckle and Old Tomcat.. Gabriel’s dam is QT’s Gallant Ghost who is is an own daughter of Q Ton of Gold (QT Poco Streke x McBear Crystal) full brother to a 2002 World Champion Reiner, 2 NRHA money earners, a Superior Reiner, & 3 Top Ten Reiners, and Hollywood Gold AQHA. This cross has created many world champion performance horses. Two of her full brothers are winning shows and one, Dun Up Double is standing in Australia. The other, QT Easy Money is in Brazil. On her bottom side, she has APHA Supreme Champion Gallant Ghost, Leo, Sugar Bars and Easy Jet. Gabriel is a very rare grullo (blue dun) homozygous tobiano which means he will always sire a coloured foal even if the mare is solid. He is also homozygous (EE) for the black gene and so will never sire a ‘red’ based foal. We are thrilled with the offspring that Gabriel is producing and he has been popular with a wide variety of visiting mares including polo ponies and TB’s as well as Paints and Quarter Horses. Gabriel’s foals are certainly inheriting his laid back attitude to life and quiet disposition and are proving to have trainable minds and are easy to work with. His first foals are being started under saddle and have been successful in the showring in both English at county level and western. Gabriel is also passing on the sort after ‘dun factor’ to a high percentage of his offspring. He has been 5 panel tested and is negative for all genetic diseases. Gabriel’s breeder, Wendy Malone of the Spotted Fawn Ranch in Montana USA has spent 3 decades searching out and selecting top and bottom lines of the best quality and says about her breeding program “I truly breed for the ‘all round’ performance horse with size and movement and colour and disposition with correct genetic crosses top and bottom that ring true in ‘type’ for cow and speed and can go western or English too. The gene pool has dominant genes to always pass on that are strong and type always with good dispositions”