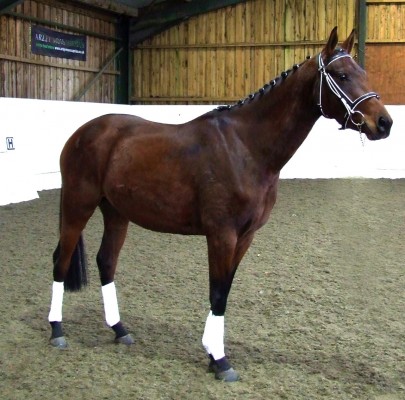 The sire, a very modern horse of unbelievable beauty and presence, descends from a fabulous dam line with 33 licensed stallions: The family has racked up nearly three quarters of a million Euros in winnings in dressage and jumping. The pedigree captures the best cocktail of dressage blood with Donnerhall, Rubinstein, Sandro Hit, and Lauries Crusader xx. This is a horse with an amazing walk and canter and a very uphill trot. He completed his 70 day test at Adelheidsdorf where he showed wonderful stable manners and ride-ability, plus a real love of jumping and the cross country. In 2013, Supertramp qualified for both the Shearwater International Championships and the Badminton Young Horse Championships, and is now competing at PSG in Germany.

The dam, an ex national hunt TB racehorse, had an exceptional temperament and proved to be very re-trainable. She won and was placed in dressage, before an injury put paid to her future eventing career. Prior to being purchased by the Woodlander Stud, she was graded into the Hanoverian stud book, so Caroline is fully pink papered.The Dam sire, Supreme Leader, sired multiple national hunt winners, including 3 Grand National runners up, and was also the sire of Lead the Way, a four star international eventer and Grade A showjumper.The Dam's damsire, Roselier, also sired multiple national hunt winners, and the four star international eventer, Sir Roselier.

The lady herself... Left to mature last year, she did 3 national/county shows, where she not only won and was placed, she also stood both Champion, and reserve champion She was impeccably behaved and was not spooked or phased by anything - even at her first national show! In the right hands this beautiful filly, could be exceptional in her ridden career, whether, jumping, eventing, dressage or showing. Shown 3 times this year only. Aintree National Show 2016 - Winner 3yr old Sport - Overall Champion Sport Horse (against ridden as well as in hand sport horses ). Great North Show 2016 - 2nd 3yr old Sport Horse. Royal Lancs County Show 2016 - Winner and the overall Reserve Champion.