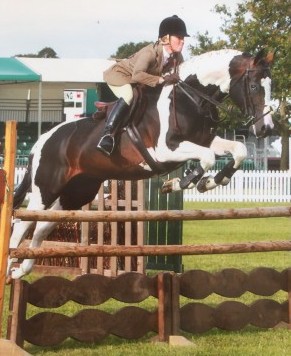 As a foal, he was DPZV foal Champion with a great score of 8.42 in Germany.

Spirit has had many wins in young sporthorse classes and taking many championships also in coloured classes up until him being 3 years old.

Spirit was broken late at 4 years old and has since been in training, when not standing at stud.

He has had training from 2 event riders and is confident and well mannered at training events and at home, he has a brave but calm attitude towards his jumping. Spirit successfully took part in the Northern Ireland loose jumping Finals in 2006 where he came 11th out of over 350 horses. Spirit is registered BSJA and has jumped BN/DISC and NC with ease. He has also gained 69% + in his dressage outings.

Spirit has a very nice length of neck, with a really good shoulder, very off the floor, elevated paces with a powerful backend, he has a great attitude and temperament, he is a very trainable horse to ride and learns very quickly.

February 2007 Spirit attended the CHAPS grading and got fully Graded as a Sporthorse in the Dressage section, he got some great positive comments, and he is at present the only stallion to be fully graded as a dressage stallion under the new system with CHAPS, as a Sporthorse.

His sire, Semper is a very influential Oldenburg approved pinto stallion in Germany, he is by Sandro, the Holsteiner stallion who is also the sire of Sandro Song and grandsire of Sandro Hit. Sandro has a total of 36 approved sons, 308 approved mares, and 27 states premium mares. Semper's dam Imago is an Elite Preferent rated KWPN mare, by Samber the world's most influential and successful pinto Warmblood of all time. Semper is also the sire of Liz Hall’s homozygous stallion Sempatico.

Spirits dam, Aleska was competed successfully at dressage and is now in Holland continuing her success; she is also a great jumper. Her sire Astek homozygous polish Warmblood was Approved in Germany by the ZfdP Selected as a breeding stallion at Medingen, Germany 1989 Performance tested in 1992 he is very noticeable in German pinto bloodlines. Aleska’s Dam Watona is by Watzmann, for a time he was the most-asked-for producer of jumping horses in Hannover. Watzmann is the sire of Walzerkönig, an Olympic Gold Medallist in show jumping for the German team in Seoul. 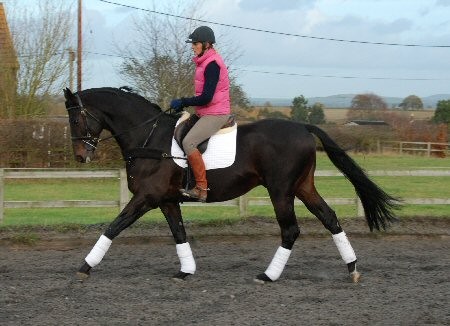